Use the kitchen stove or an electric burner (sold separately).
Place a pot on the burner. (earthenware, enamored cast iron, stainless steel)
Fill with 1-2 liters of water.
Add 1 herbal packet to the pot. (If you have loose leaf herbs add 1-3 tablespoons.)
Cover the pot with a lid.
Cook on medium for 10 minutes/until it starts to steam. The herb water will be tea colored.
​If you would like to get double use out of the herb packet carefully remove it with a large spoon and store it in the fridge for next day use.
Transfer the pot to your steam setup. Remove the lid and it's ready to go
If you do not have a steam setup you can follow these easy directions.
Put the pot on the floor (preferably on top of a plush carpet, rug or blanket).
Place your feet on either side of the pot. (Caution: the pot is hot so please be careful.) 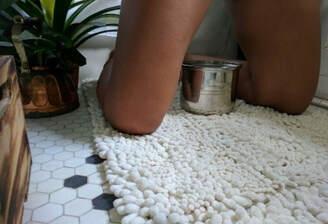 Carefully lower your knees to either side of the pot. and kneel over the pot
​Tip: you can put a towel around the pot for extra protection to make sure not to burn yourself.(See picture below) 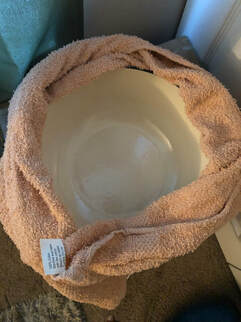 You can steam in this position
​


Cover your bottom half and the steam pot with a sheet, cloak, towel or robe to trap the steam in. (See picture below) 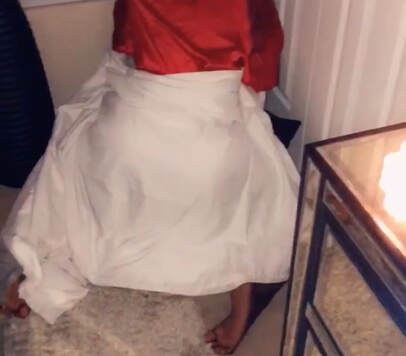 Be creative while steaming. You can use a bedside commode, a steaming stool, or add a seat to your favorite chair and place the pot under it. But DO NOT steam from your everyday use bathroom toilet.
Benefits

Urge to Urinate
Sometimes people report the urge to urinate while steaming. The best practice to avoid this would be to have clients use the restroom directly prior to the steam session.

Increased Period Clots
Vaginal steaming loosens up old residue in the uterus. When the following period comes it may flush out and increase the menstrual clots. As these clots clear out from period to period it should result in a full uterine cleanse (fresh red blood and no clots at all).

Increased Period Cramps
As steaming has stimulated a uterine cleanse the uterus may contract to push out old residue that has become loose. These cramps are a sign that the uterus is assisting the cleansing process. It is important to wear pads or period panties and not block up the vaginal canal with tampons while the period cleanse is taking place.

Increased Irregular Vaginal Discharge or Odor (white, green, thick, clumpy)
The warm nature of the steam helps to decongest any irregular or excess mucus on the uterine lining or in the cervix. As such steaming will often result in the liquidation of the mucus. After a steam session it comes out as increased vaginal discharge. This is good. It's a sign that the vaginal steaming was effective and that a cleanse is happening.

Itchiness
If the irregular mucus coming out has itchy bacteria/yeast/virus in it this can cause itchiness as it clears out. The client should try to get the mucus off her skin by using a peribottle (spray bottle) to rinse it off regularly throughout the day. Please talk to practitioner to be referred if yeast is too consistent.

Bumps: Bumps or a rash might be a sign of an allergic reaction to one of the plants in the herbs. Steam without herbs next time to compare.

Emotional Release (i.e. crying)
Sometimes someone has an emotional release during or after a steam session where they begin to cry. This is okay.

Earlier Periods
Steaming can cause periods to come earlier or later than expected. This is good as long as the overall cycle is 28-30 days. Please discuss if steaming is causing periods to come later.

Brown Discharge After Steam Session
Brown discharge after steaming is a sign of old residue coming out as a result of the steam cleanse. It is a sign of the cleanse and a good thing.

Abnormal Bleeding -- Onset of Fresh Spotting or Bleeding
The onset of spotting or bleeding after steaming may be a sign of a uterine cleanse response to steaming or also uterine fatigue. Immediately go on bed rest and consult me so I can refer you to see an acupuncturist or Chinese Medicine Steam Therapist in order to get an herbal formula or moxa treatment to stop bleeding.
​
Bowel Movement and/or Gas
Since the colon borders the vaginal canal steaming can help to stimulate gas or a bowel movement. This is a good cleanse side-effect when someone needs a colon cleanse. If the steam session causes loose bowel movements or diarrhea this means the cleanse is too strong. The herb dosage is likely too strong. Adjust the setup for this person next time by using 1/2 of the current dose of herbs.

Sexual Arousal
This can happen as a result of steam bringing touch, heat and circulation to the genitals. Sometimes it happens during the steam session, sometimes it can happen to be heightened libido in the time period after steaming.

Skin Feels Raw or Stripped
This may happen if the steam was too hot or if someone steams too frequently. It goes away in less than 24 hours. The person should make sure to lower the heat next time or steam less frequently.